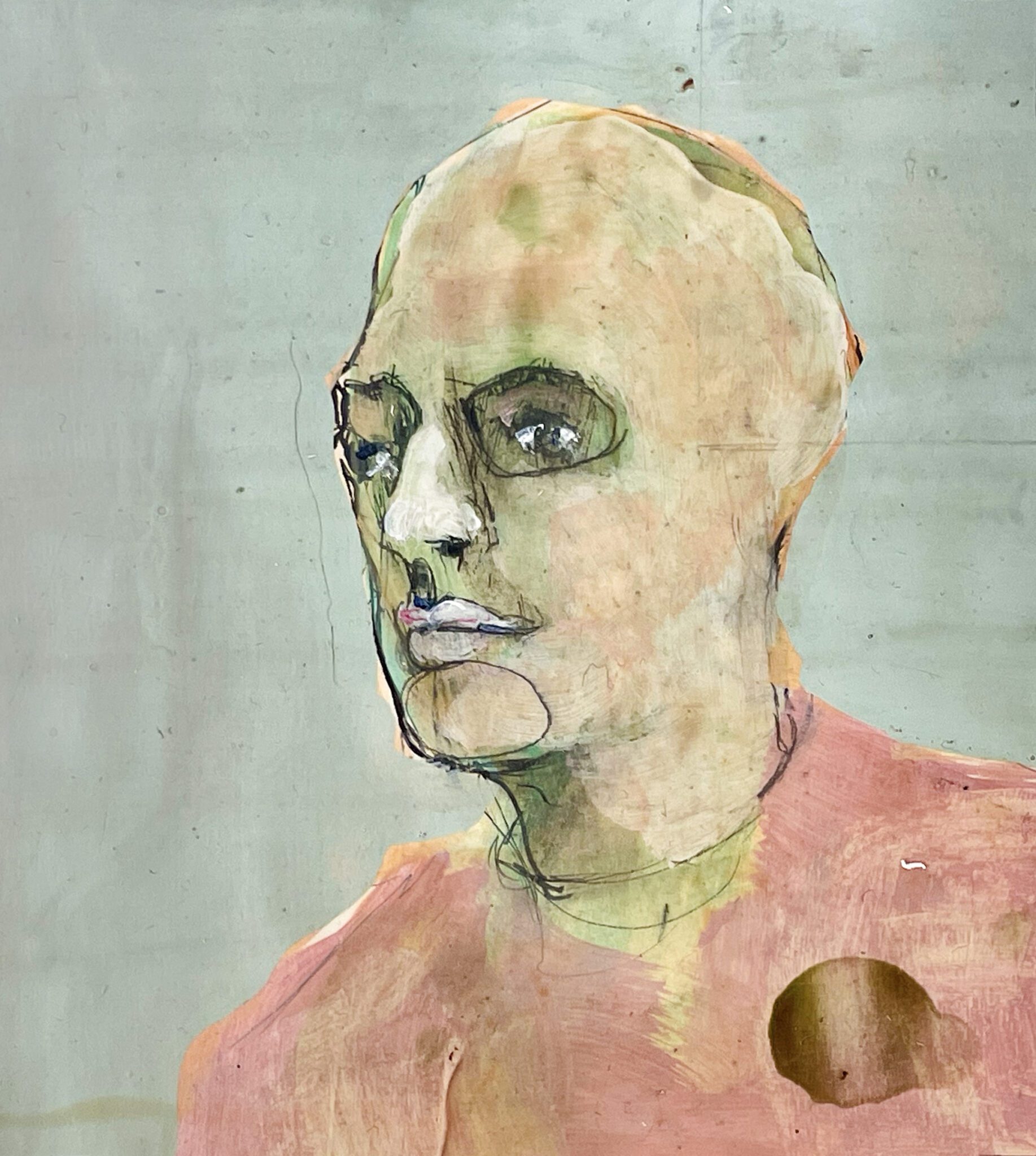 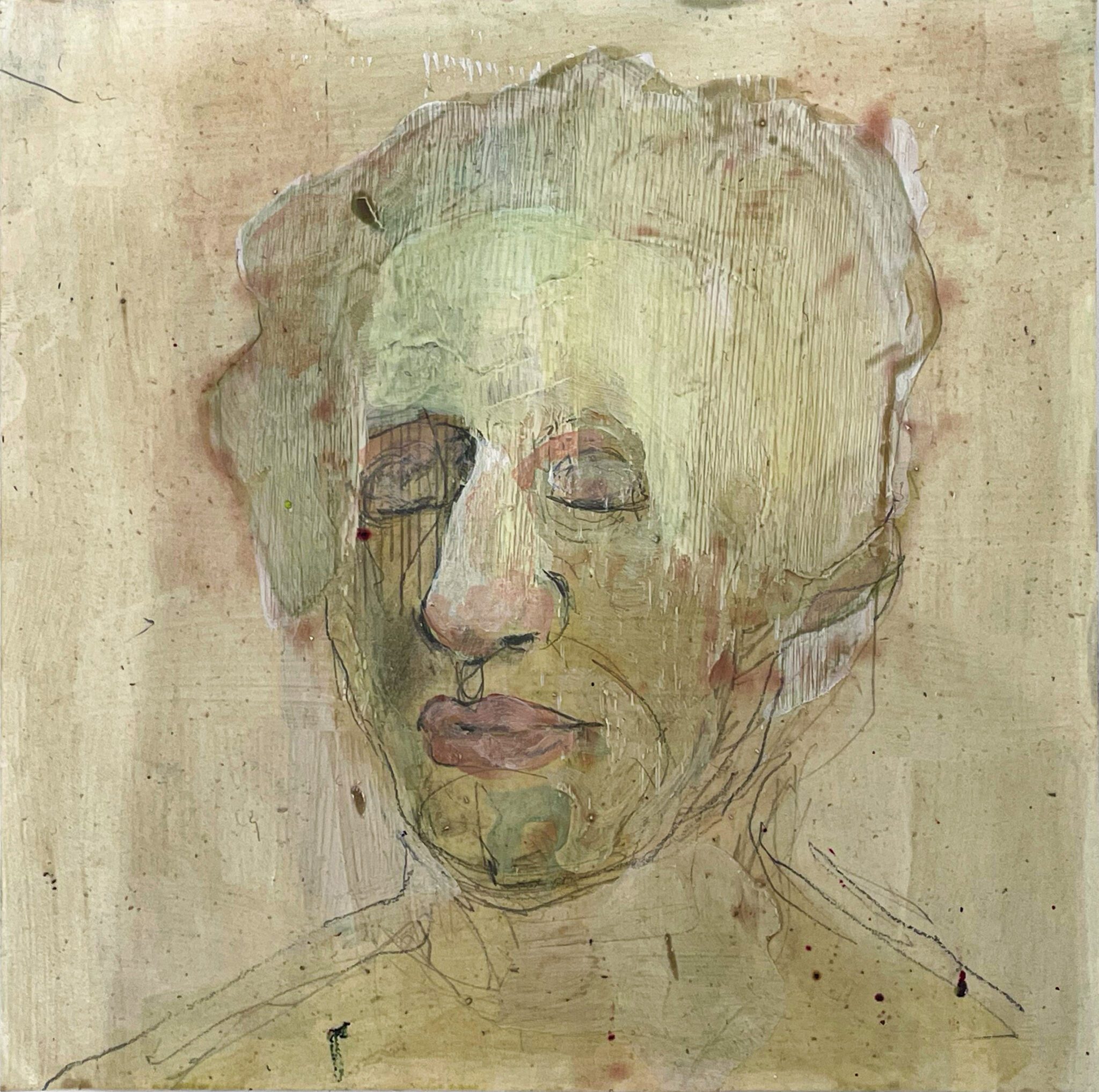 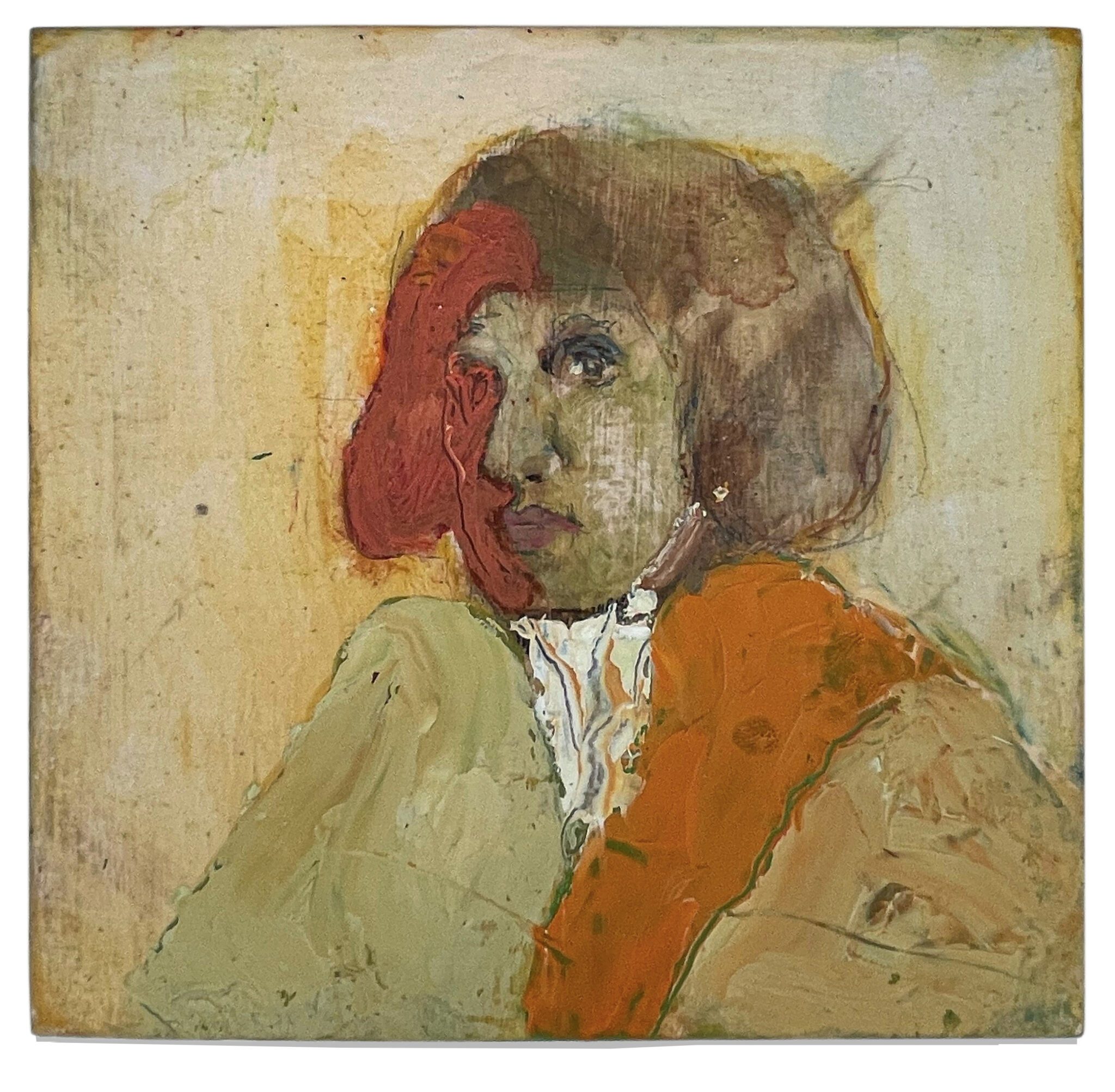 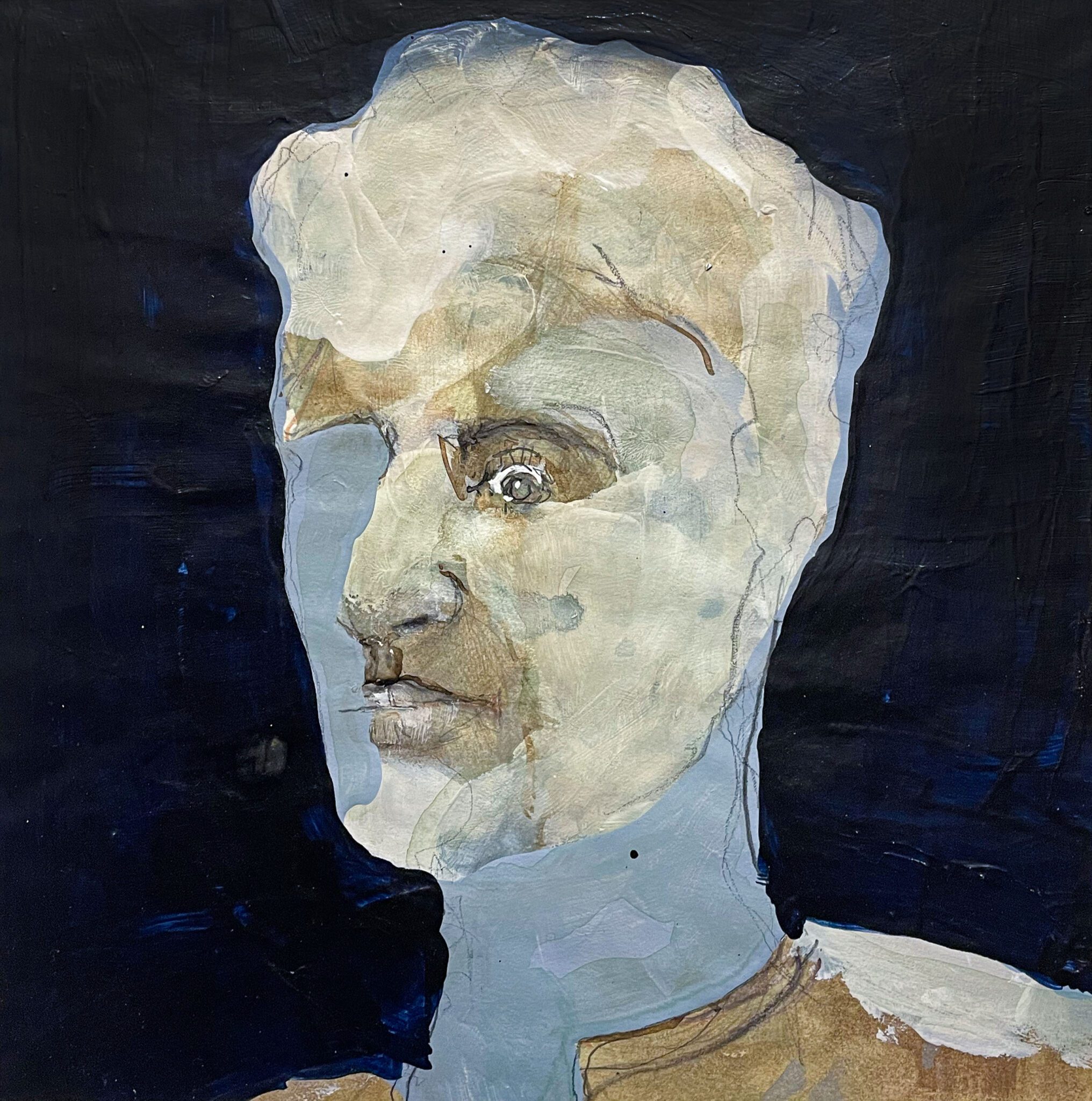 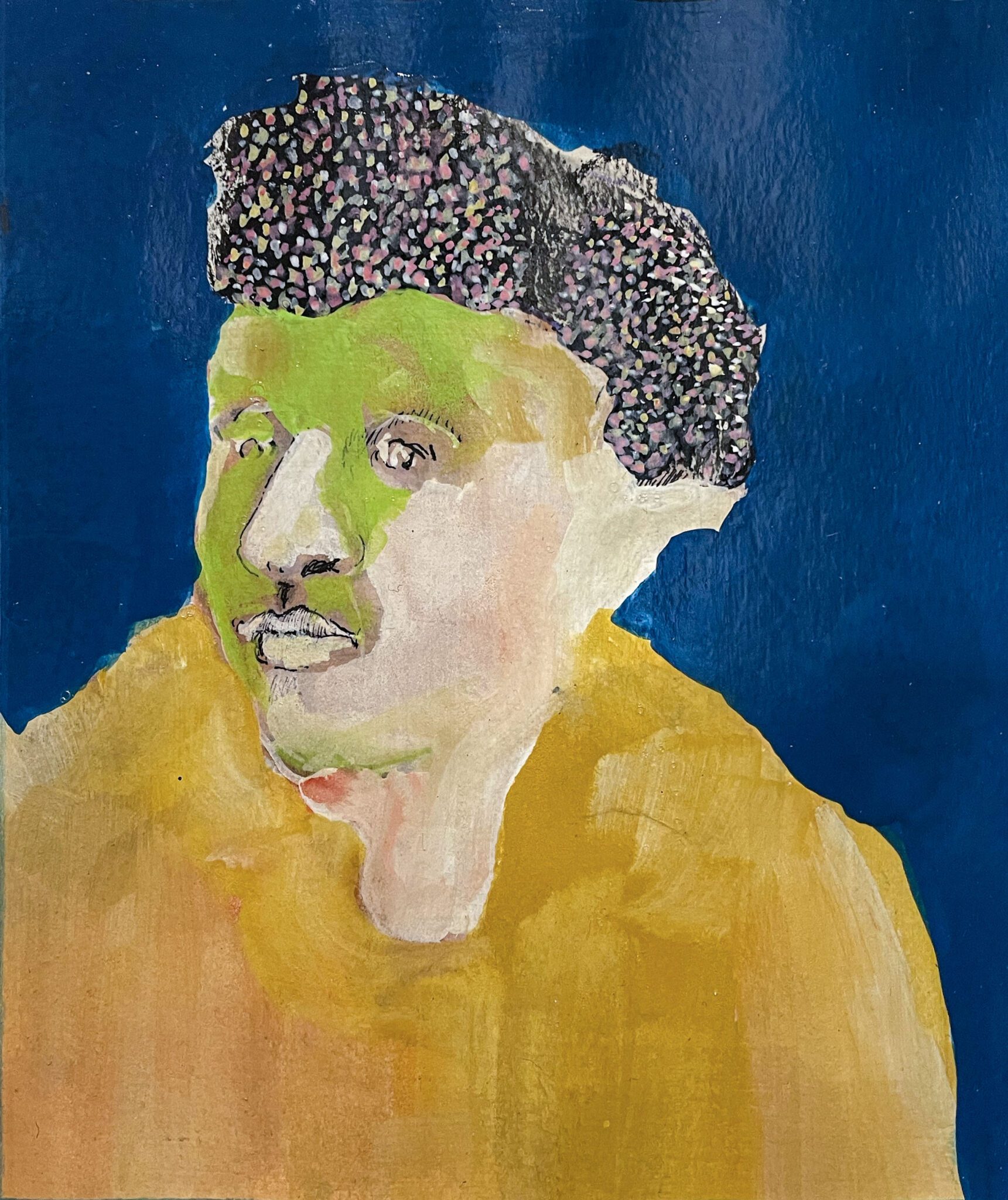 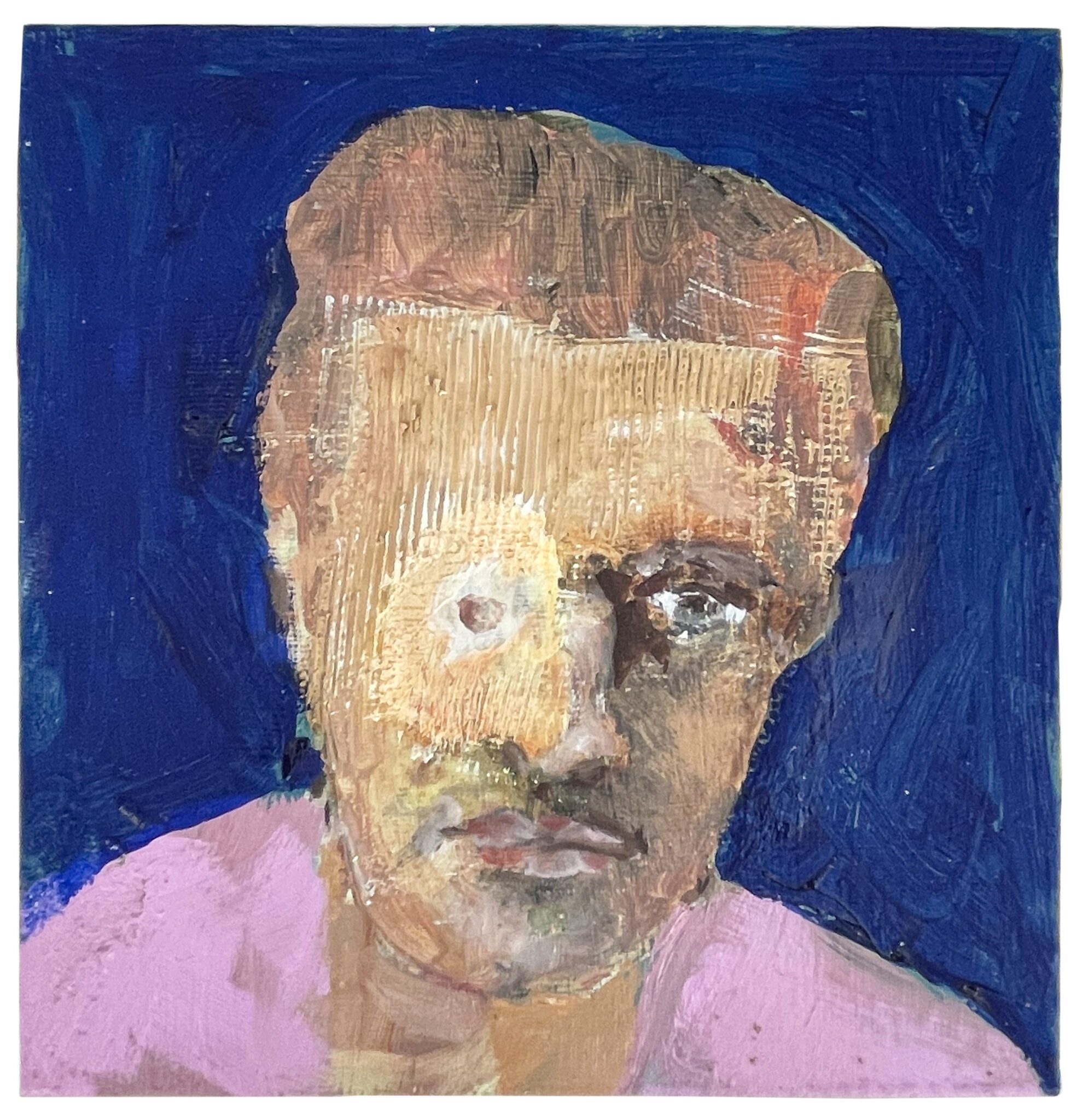 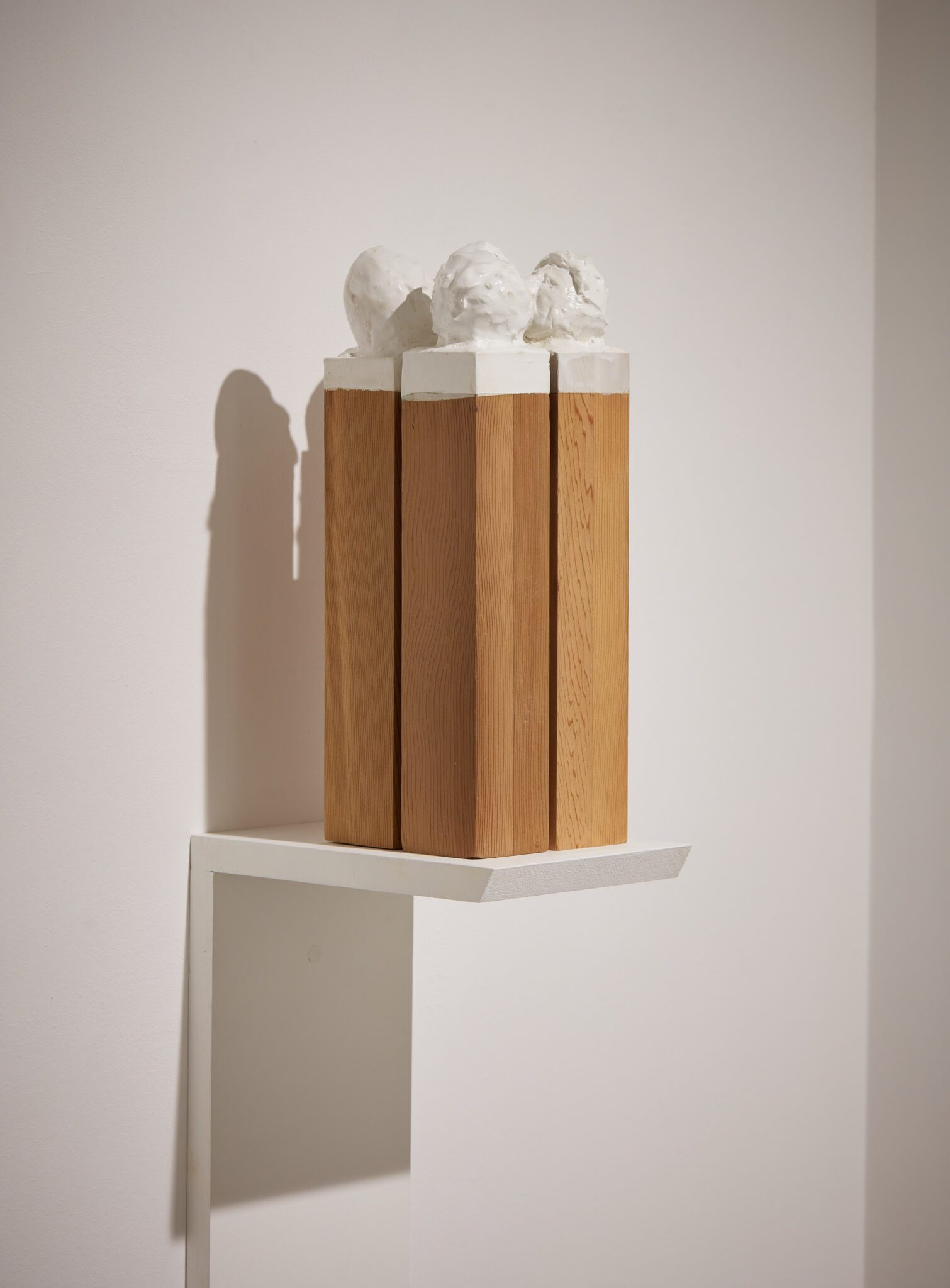 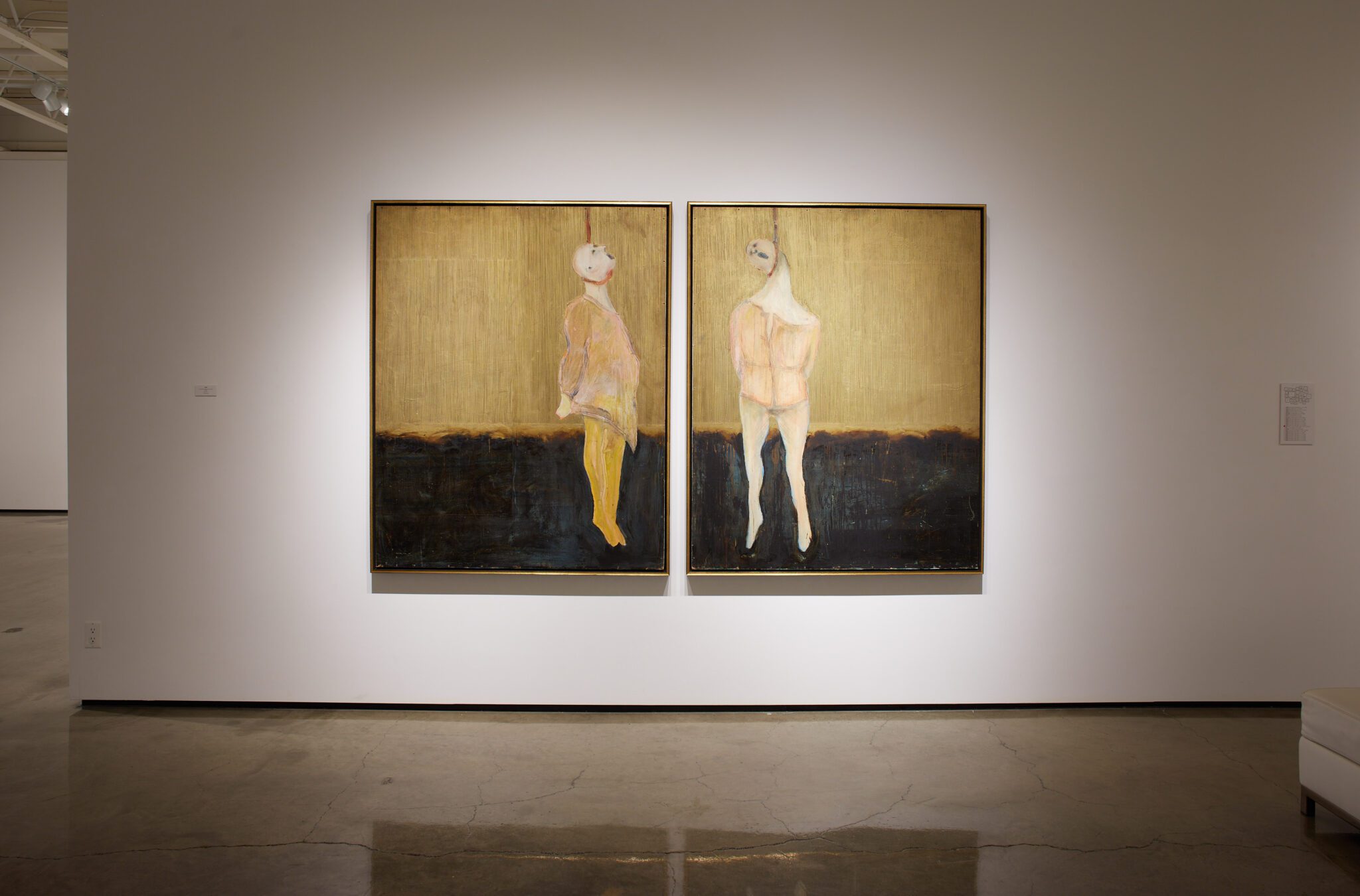 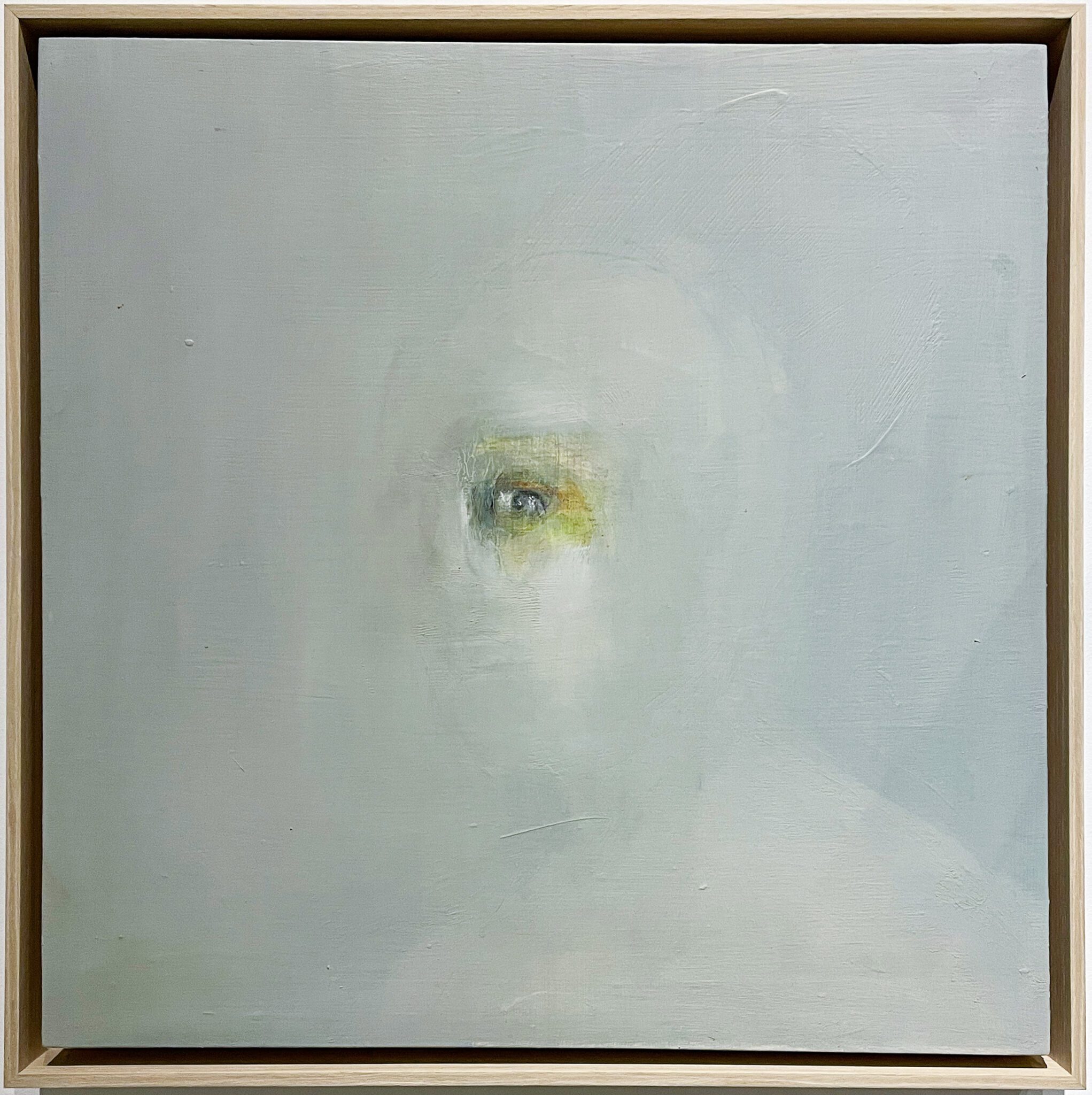 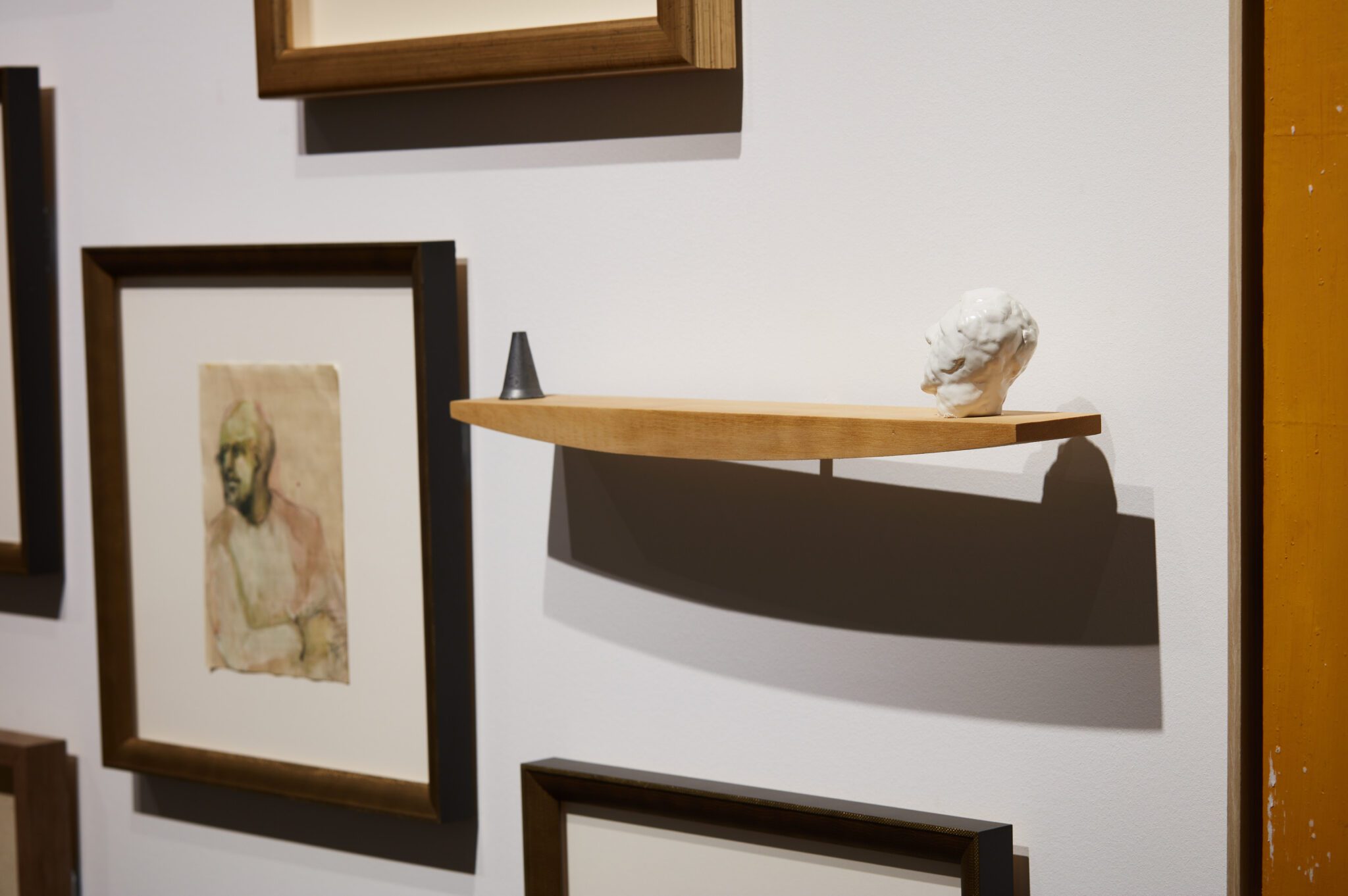 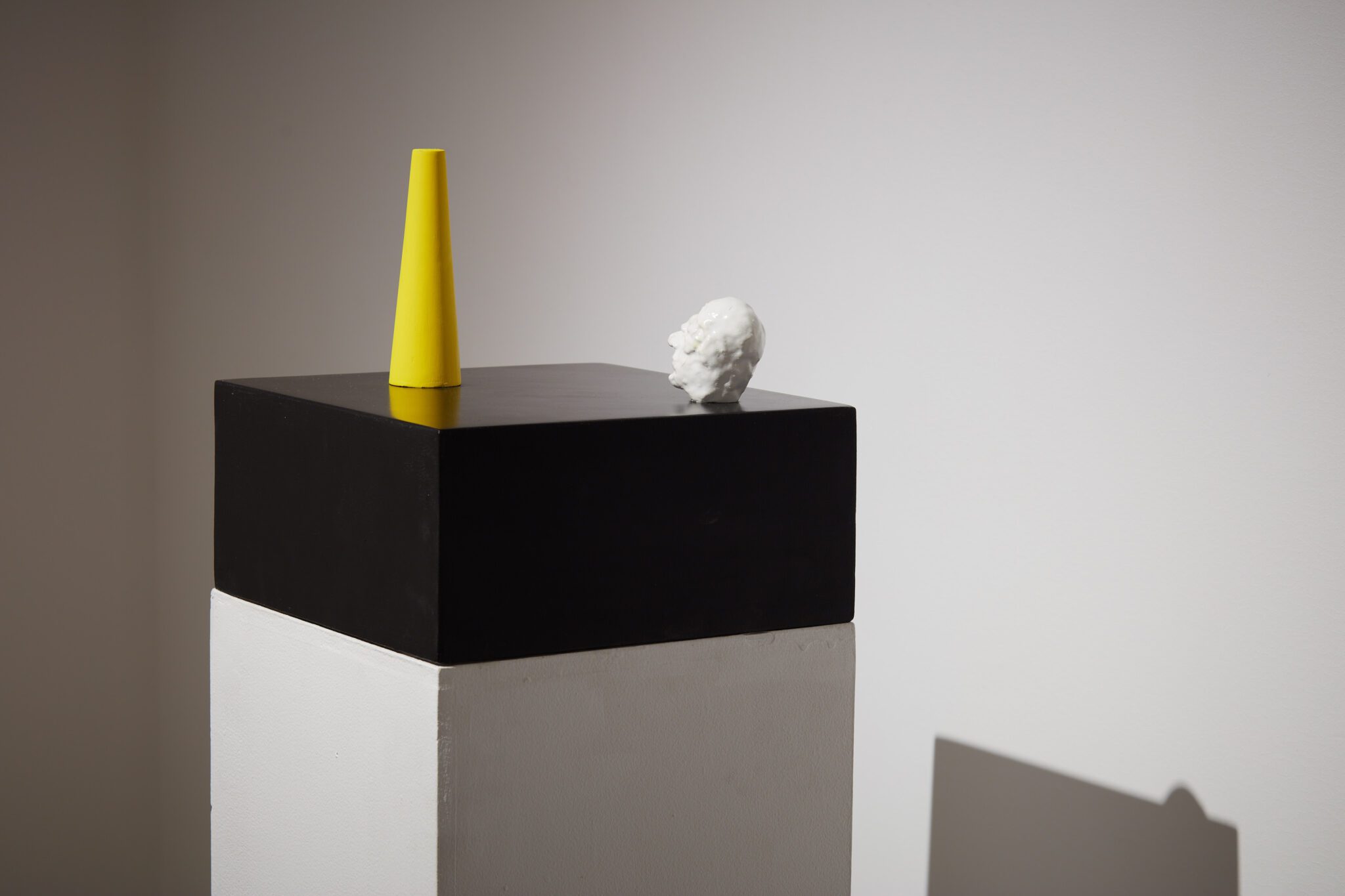 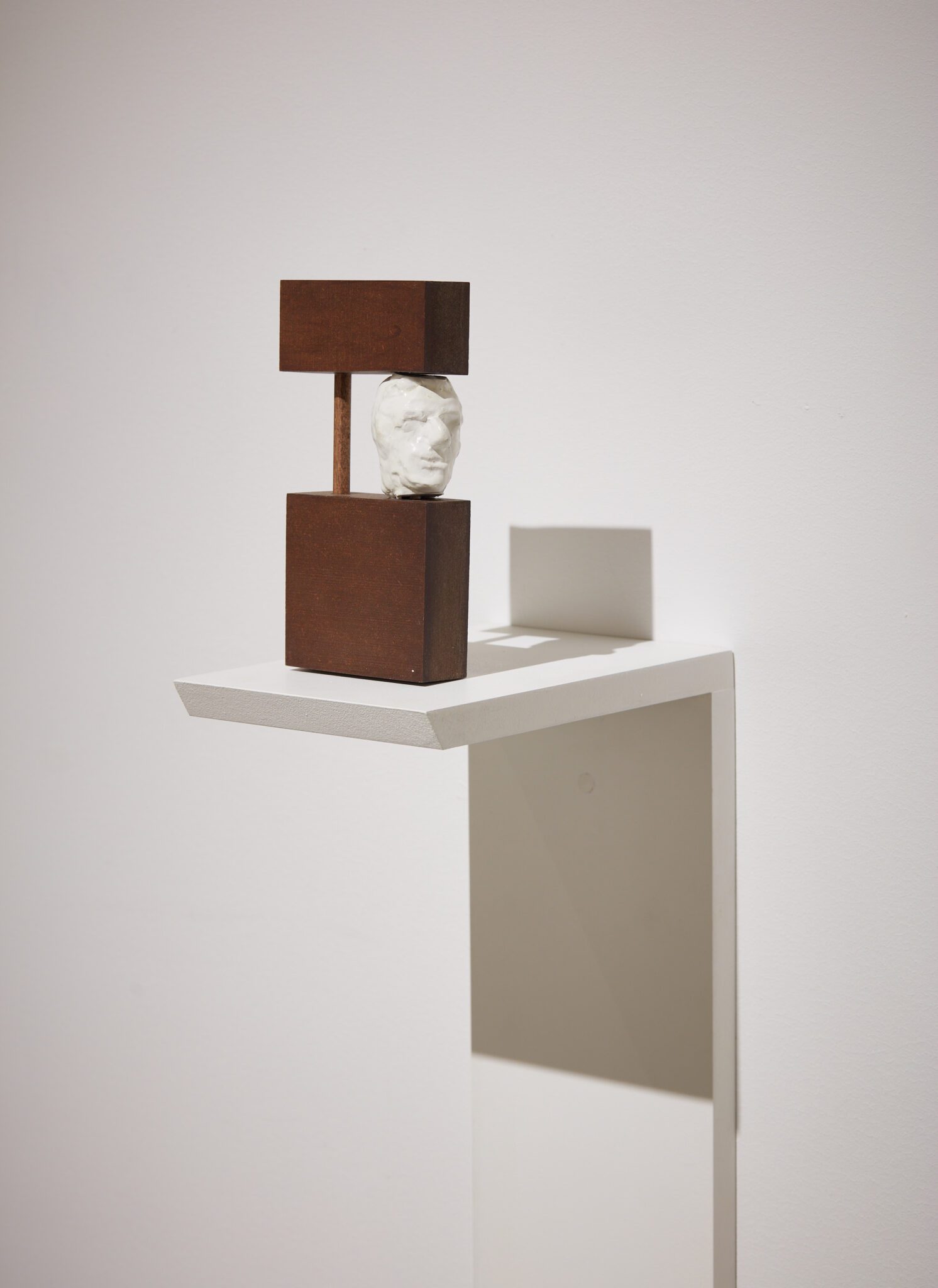 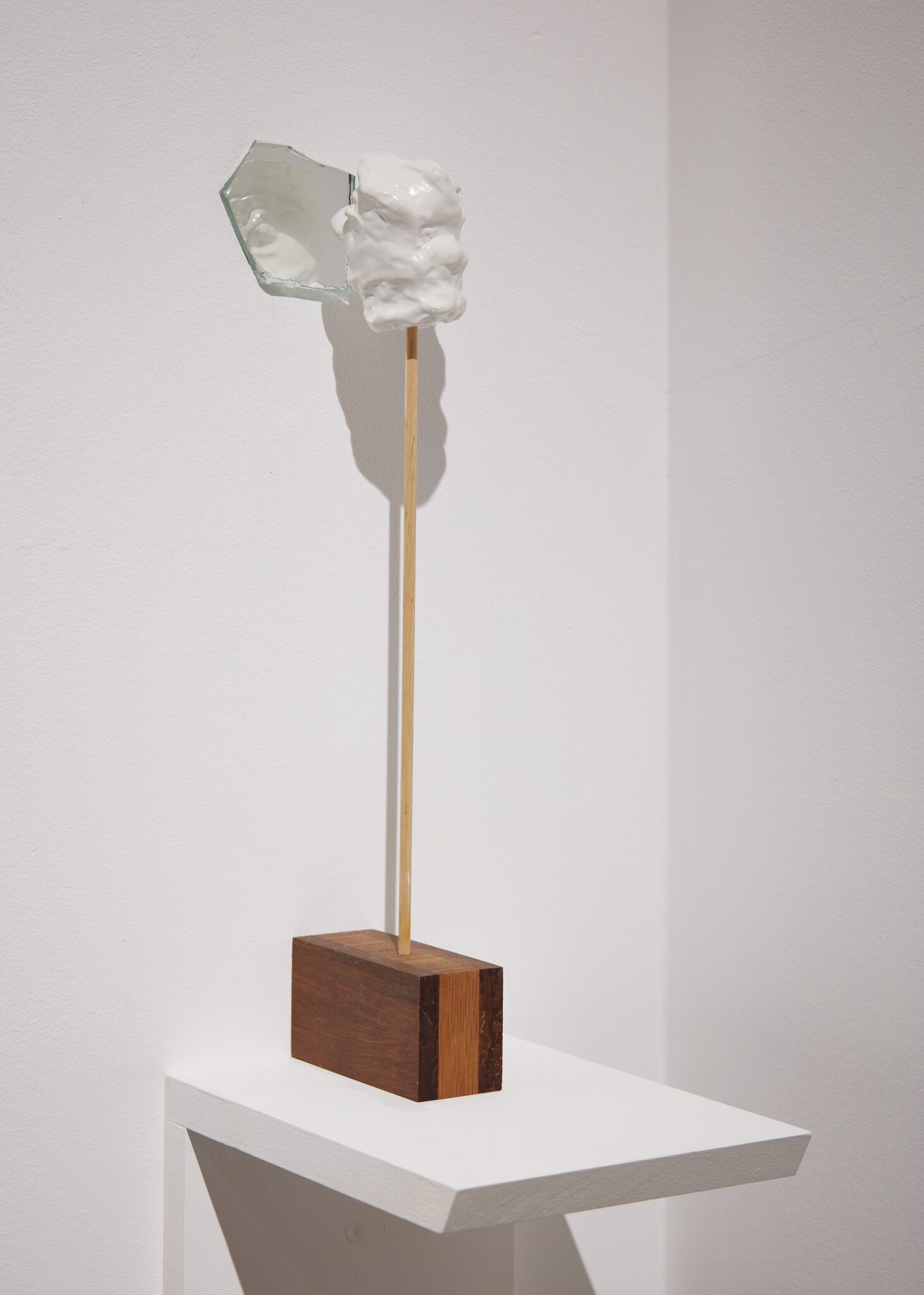 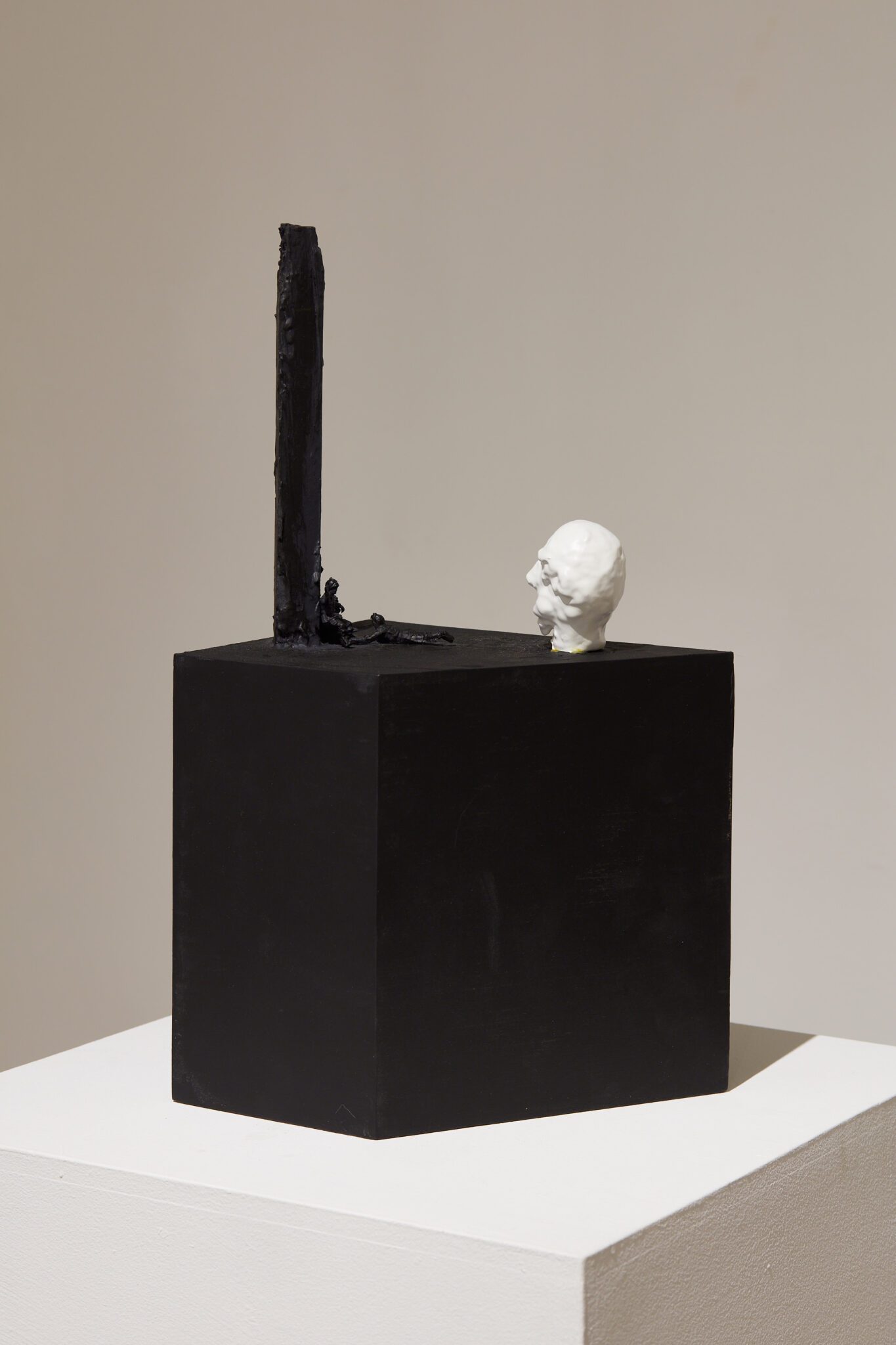 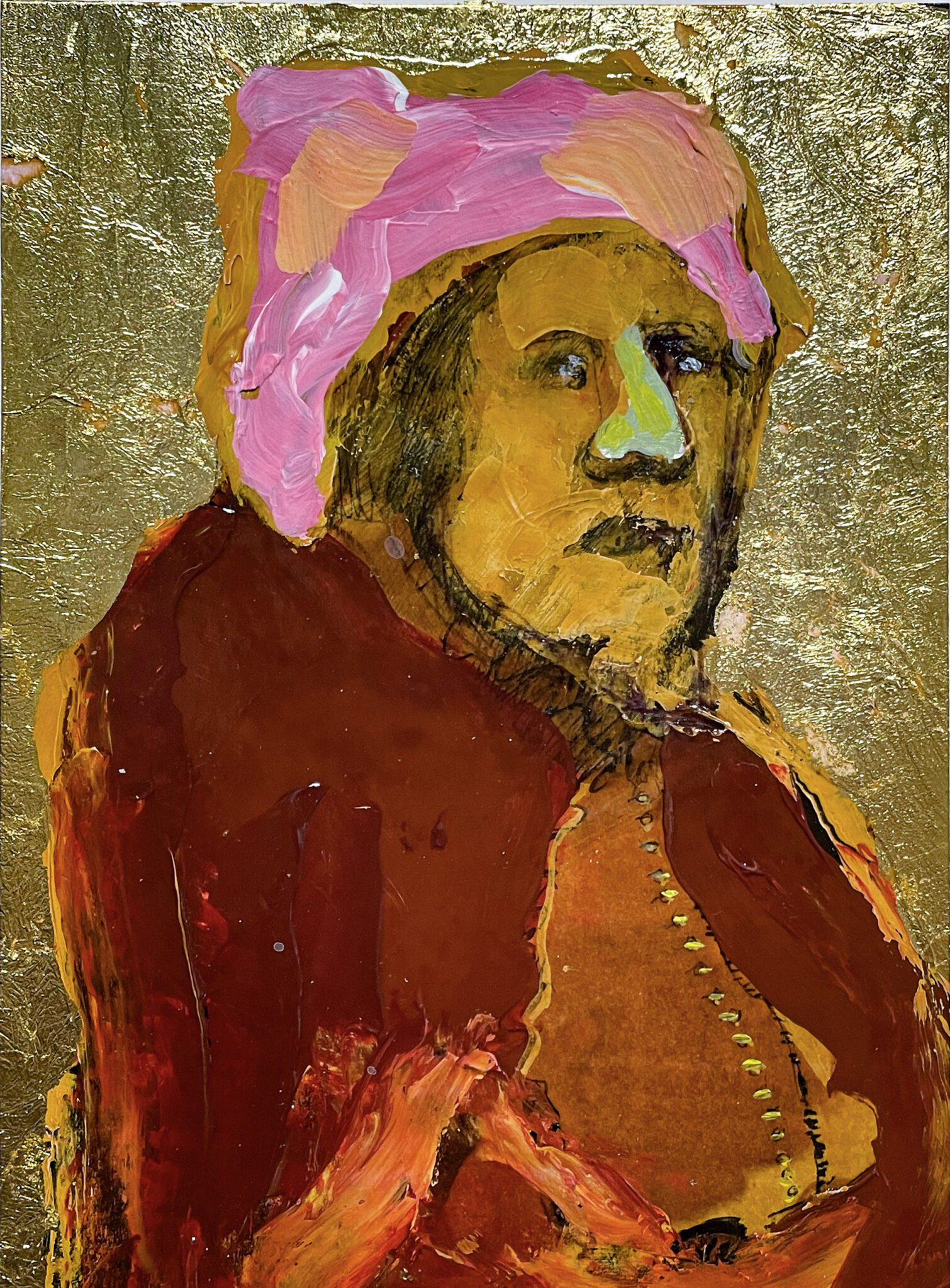 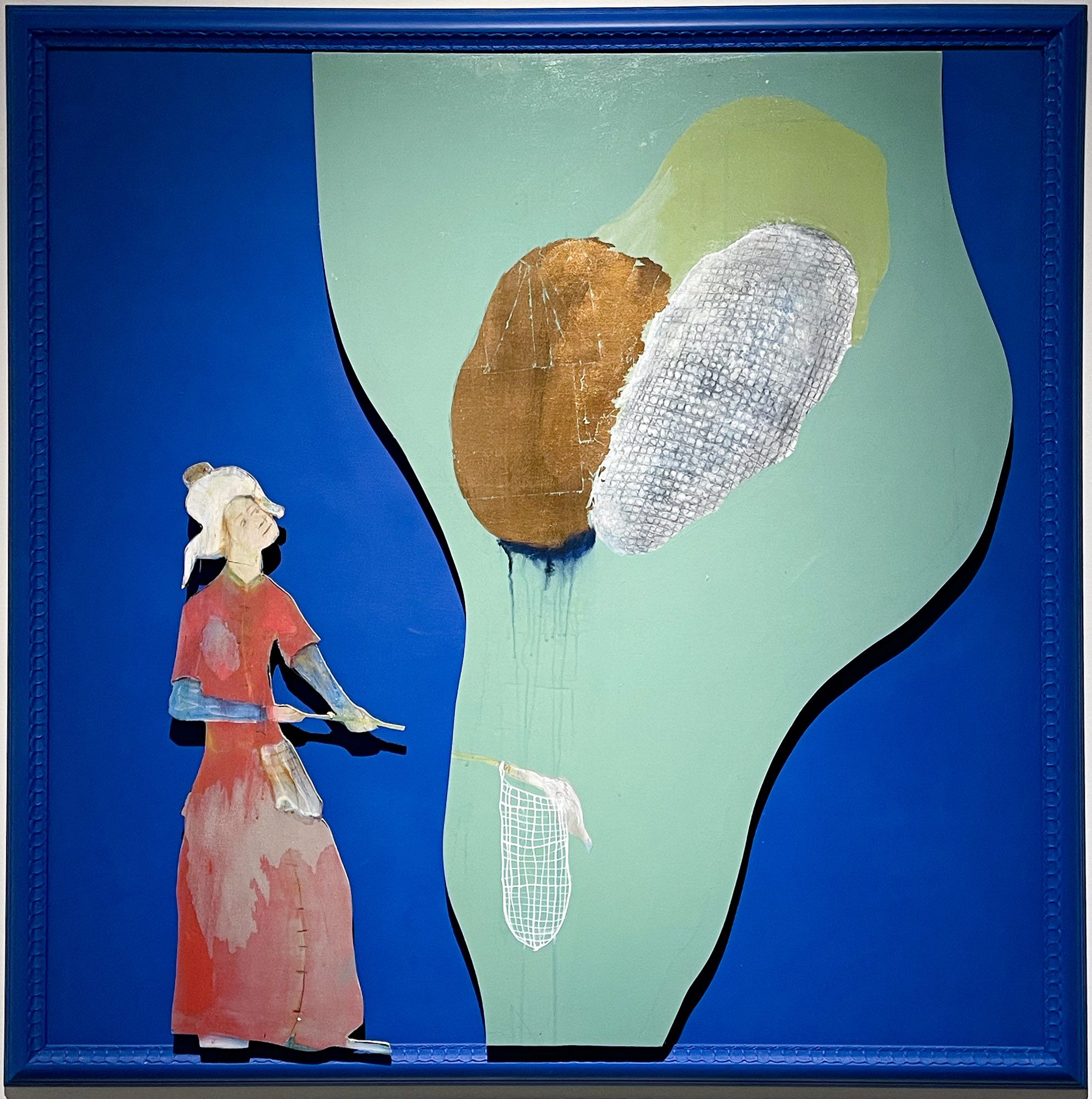 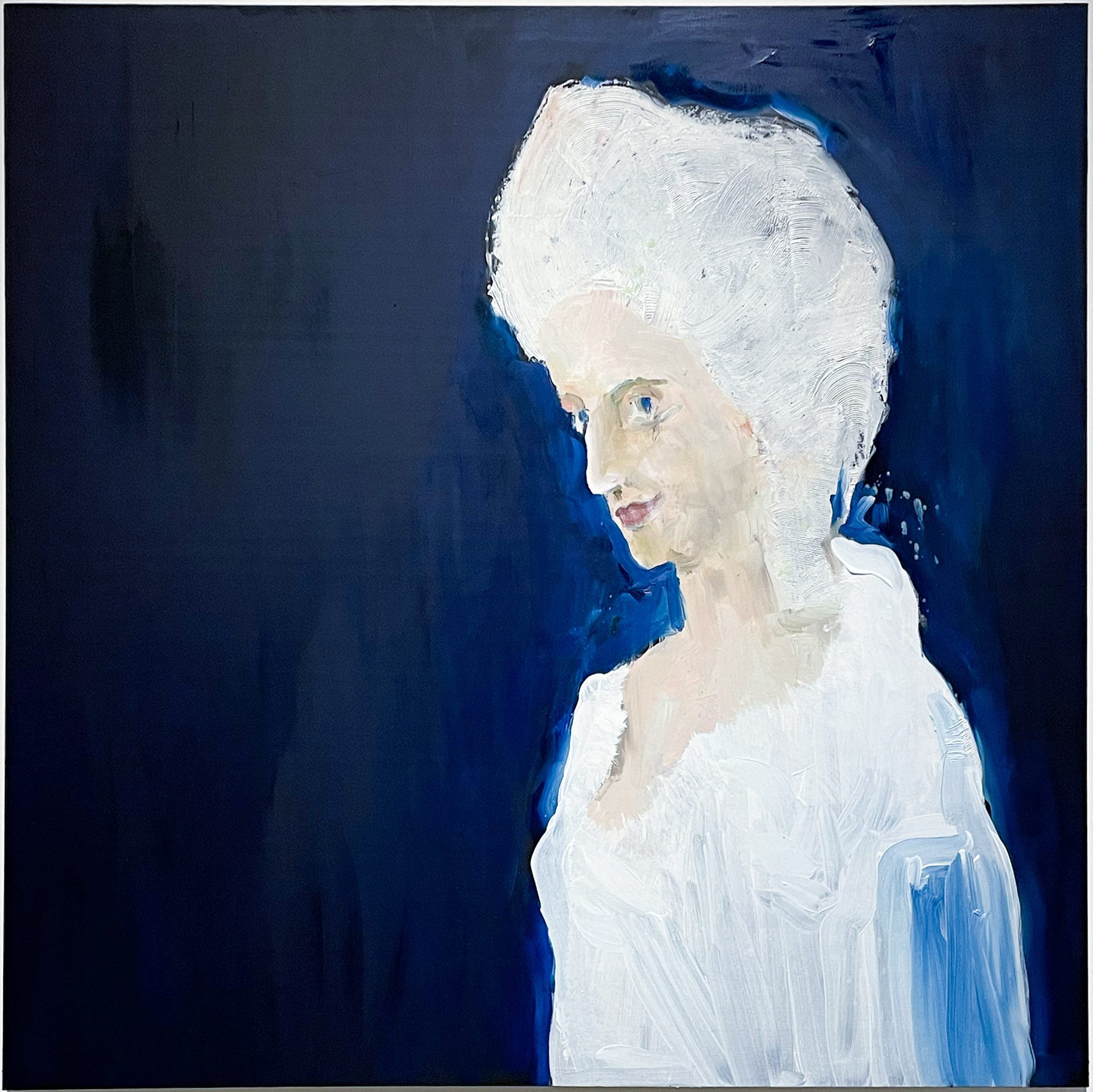 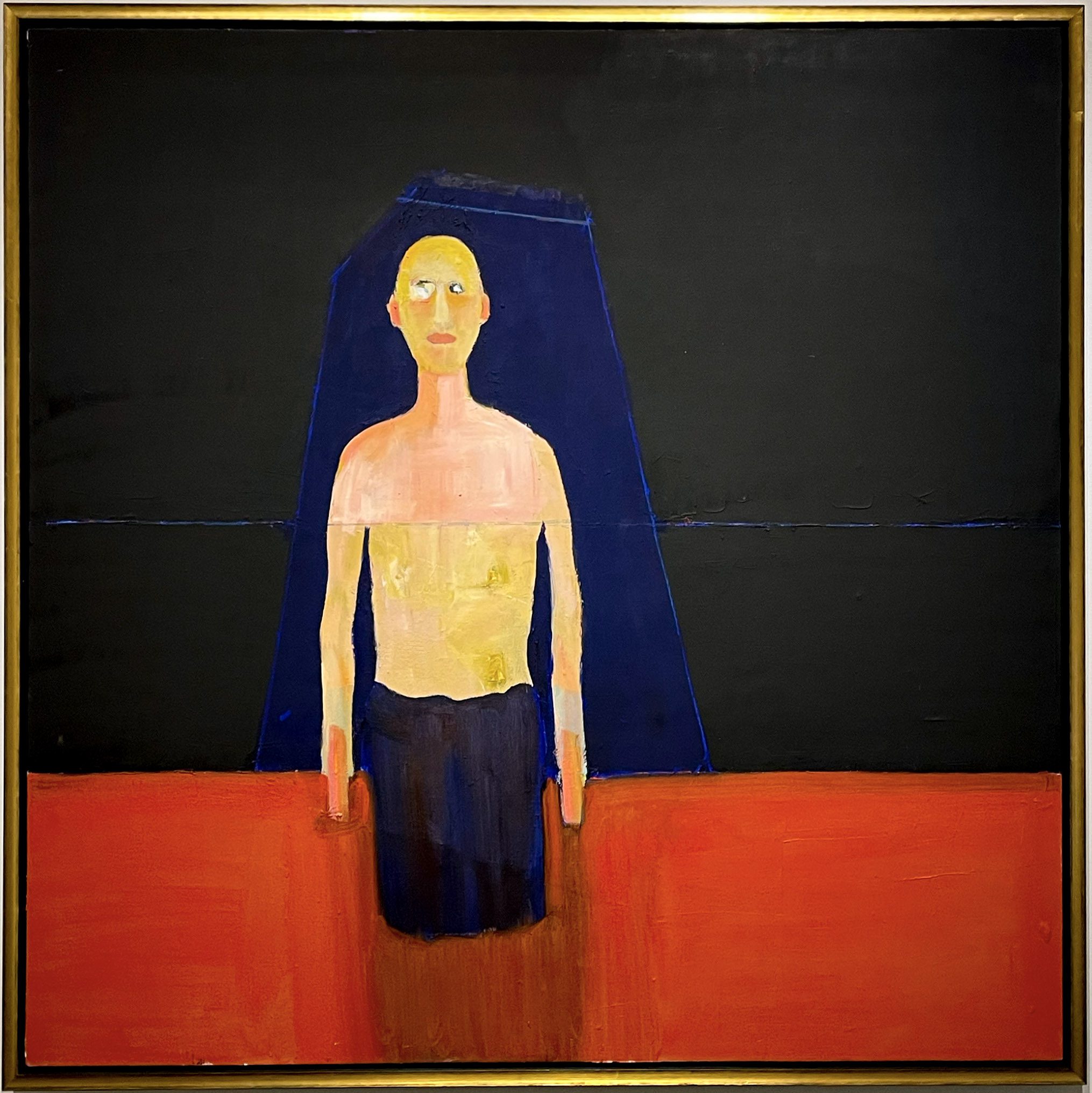 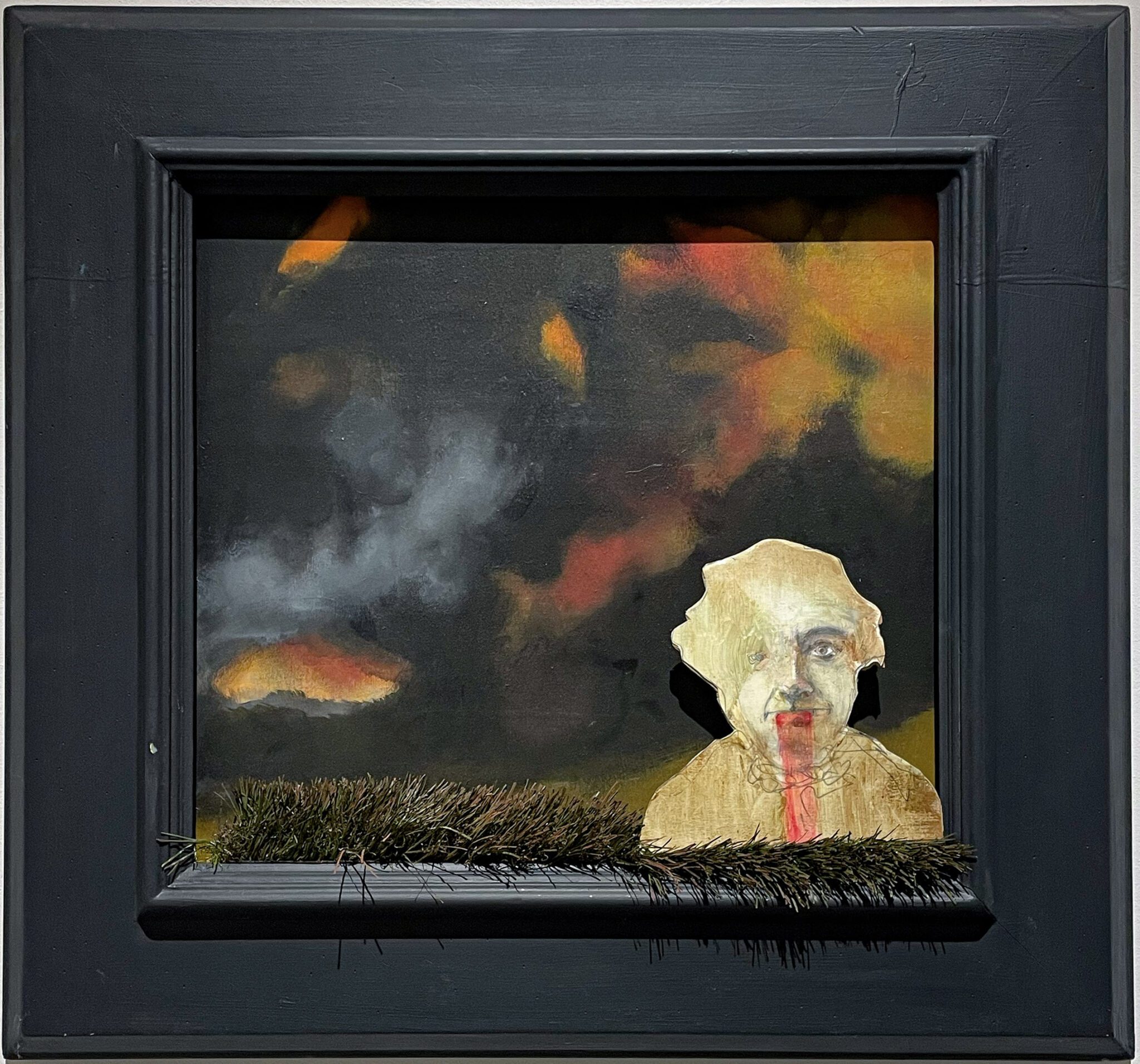 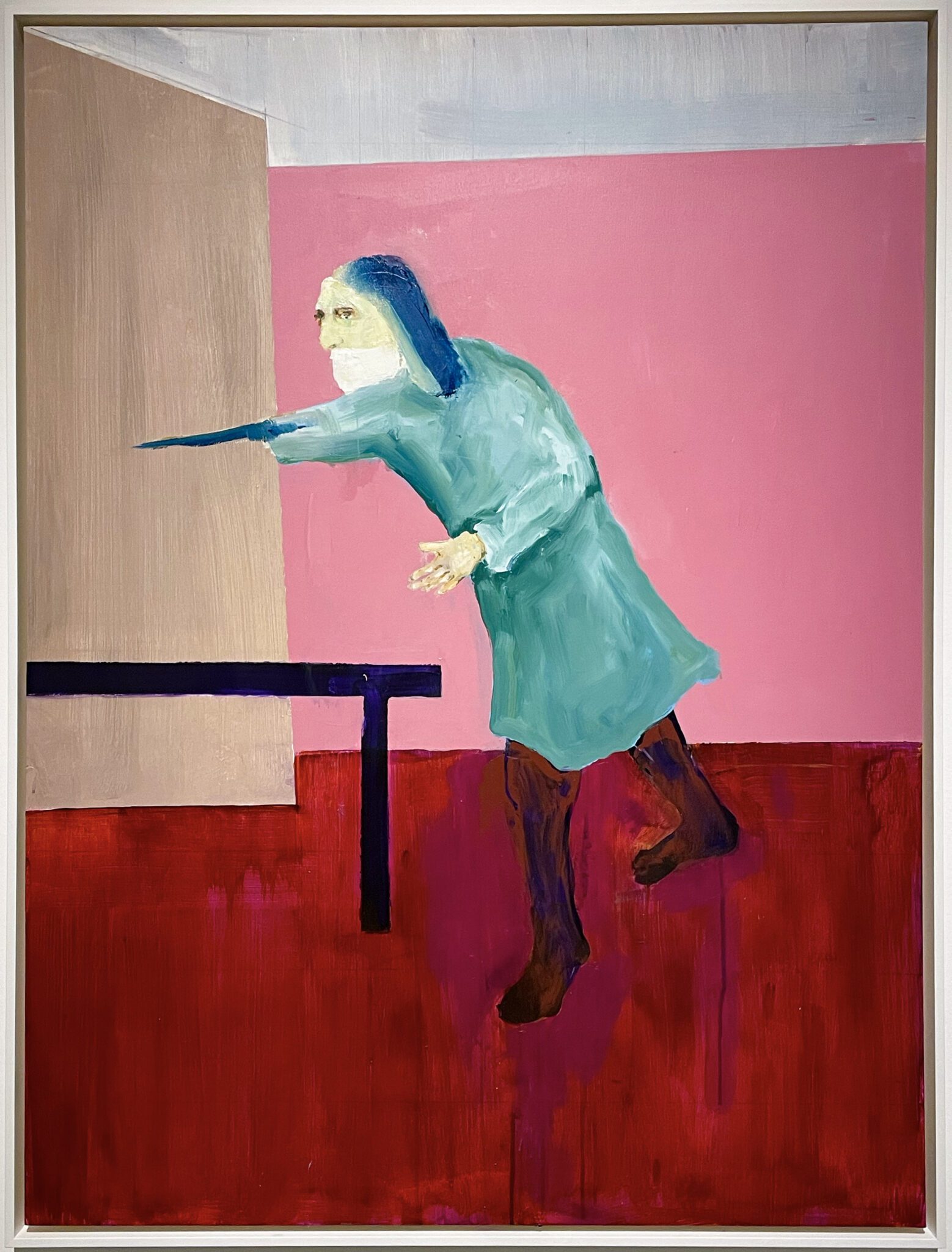 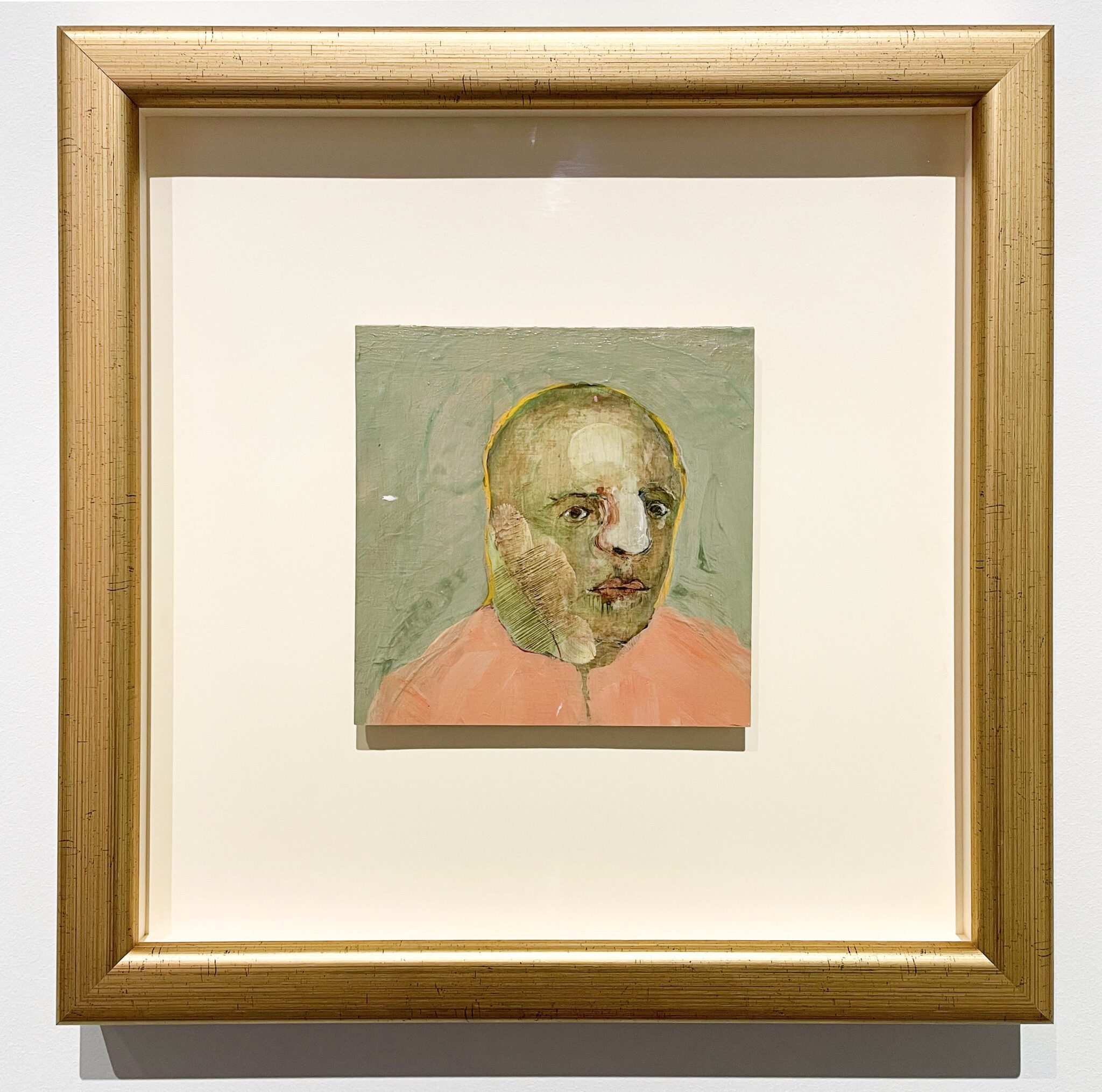 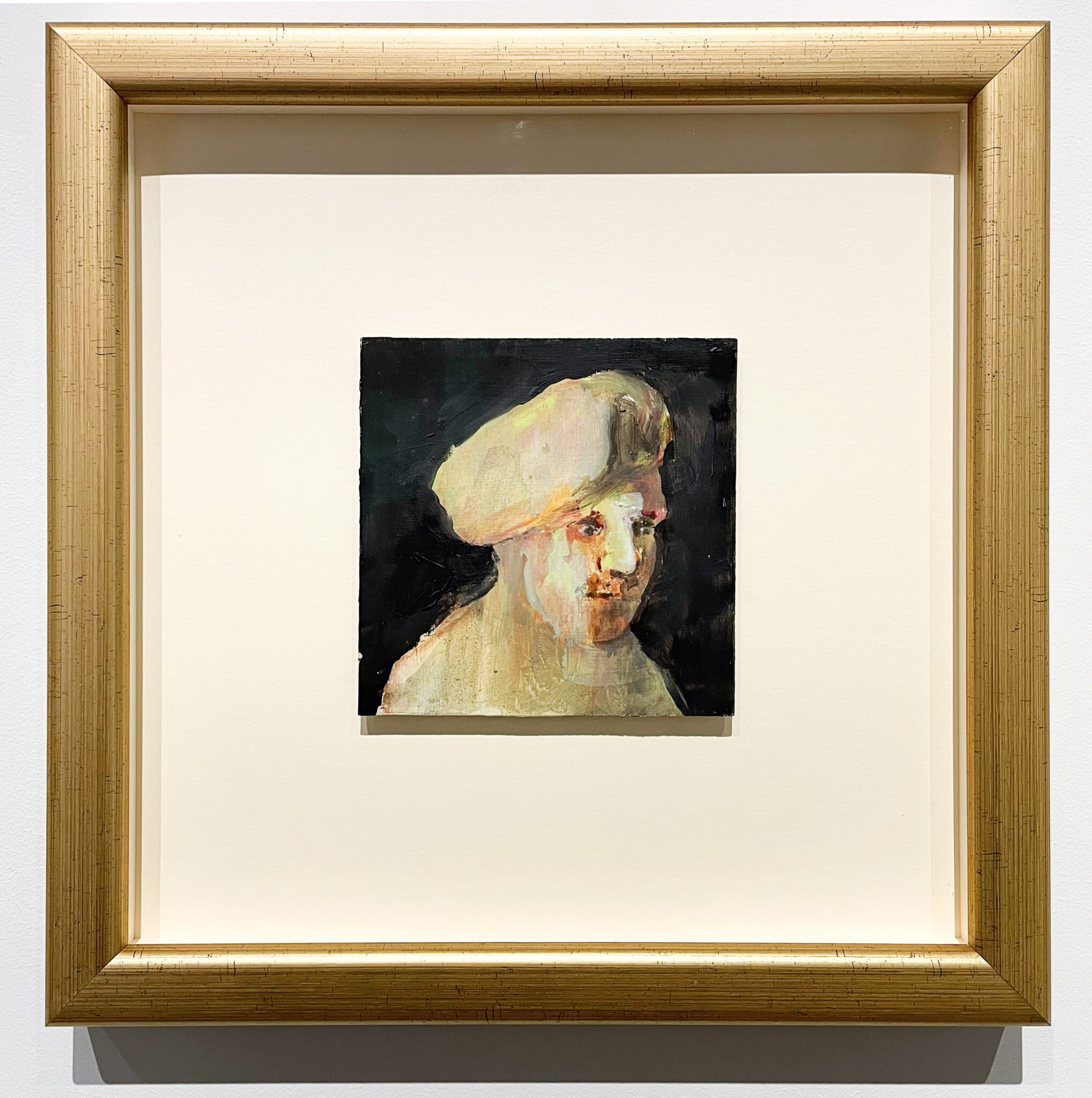 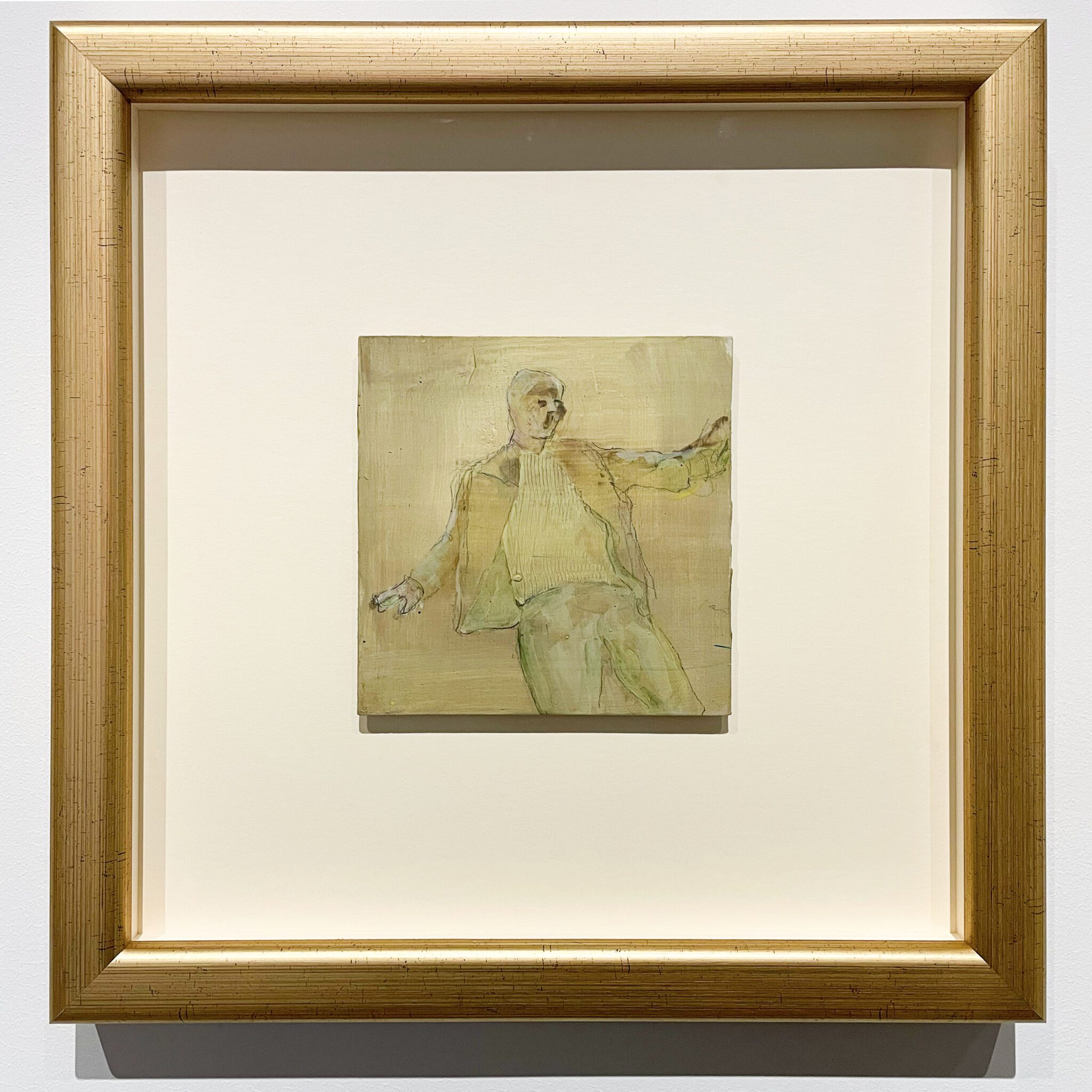 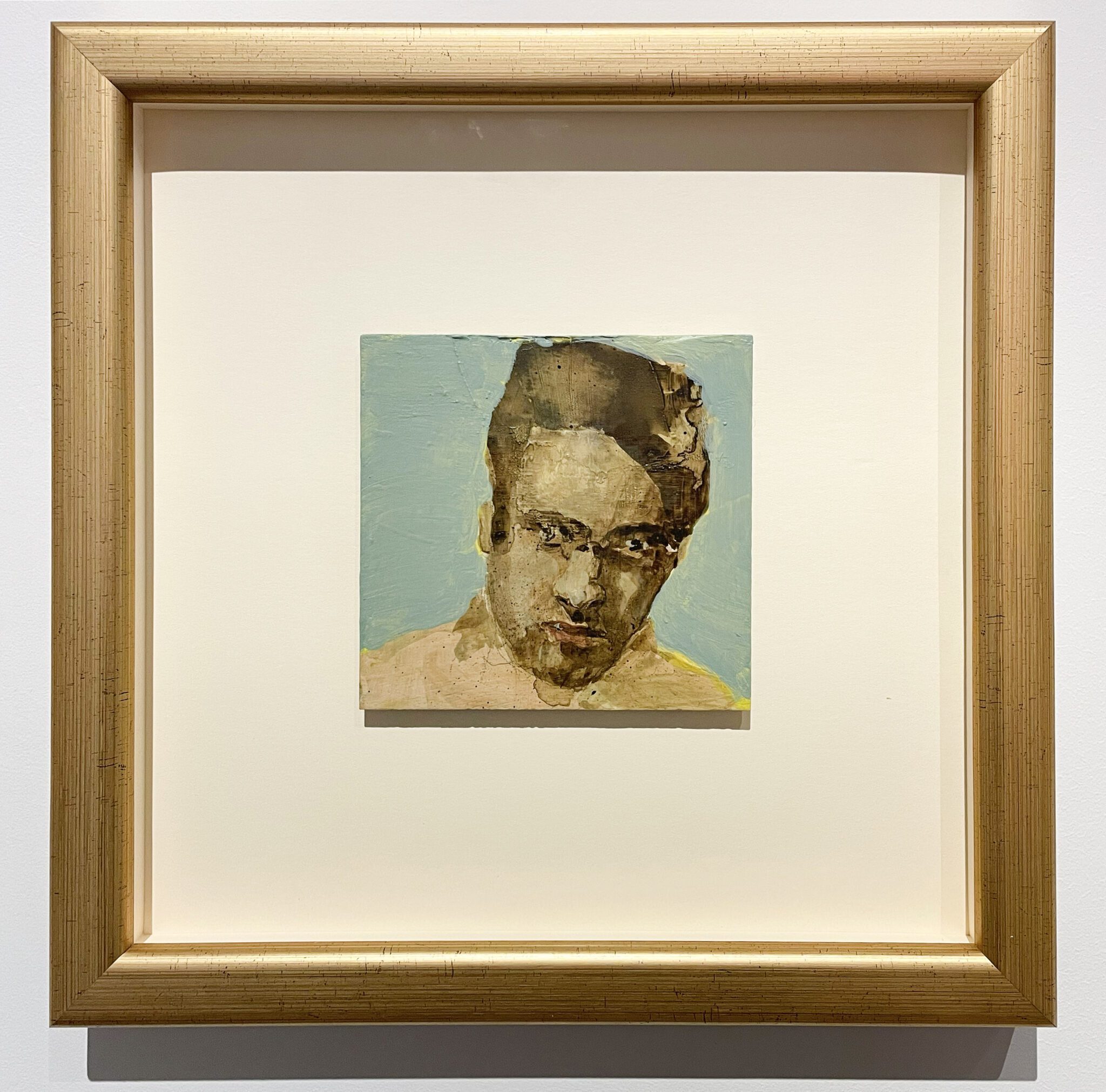 Michael Bjornson draws.  Out and about, pulling characters from his head, he then reworks in the studio, choosing from a plethora of drawings.  He revisits spontaneity with a faint intention in mind, often imprinting upon the figure a slant that brings the orientation back to the materials, colors staining and collaged materials forcing patinas as they resist the applied. He may obfuscate with a milky wash, circle a neck with scarlet, paint a puce wash beside an eggplant purple which provokes the realization that this head exists only because of the mysterious urge to make. Hebrings creation concepts, the silent partners of every artist, into the room, forming a collaboration between life and art that is orchestrated by the artist.

Many of the works are best termed ‘heads’ rather than ‘portraits’. Not specified as particular people, these denizens of the page are unnamed; recorded or remembered from people seen in movies, on the internet and  in passing. They seem more alive than even the great portraits managed. Infused with intrinsic breath, these works on paper are palpitating human meaning. As if they never sat still and still won’t, his visages waver at the outlines as if unsure of where to settle. A nose leaps a notch off the face on second glance, a chin begins to sag, a mouth trembles to the extent that it raises concern, a pale stain seeps from a pate to bleed brighter at the tear duct. They are not scary, but dramatically odd, engaging curiosity as to who, why, where, what caused these presences to come into being.   The subjects are not conducive to classifications – not sociologically, historically, by economic status, or occupation. Each is everyman (or woman) and yet there has never been this life before he laid his hand to paper. Although there is no indication as to context, each figure, perhaps because it possesses the quality of becoming, implies a narrative. Not as rooted though as a portrait, these persona appear to have simply turned up, born-again, changelings come back to earth still bearing semblance of a subjective presence but tangential to any principal inspiration.

Michael is prolific and the quantity adds quality and potency like maturation.  The urge from impetus to selection through execution to editing and the complications of alterations comes across as inspired, as if there isn’t an impediment that could stop the flow. Although it is labor – it results in a ‘work’ – there is no evident tension of execution, as if quick and painless rather than lingering and struggling with birth, these personalities entered. There is a rightness surrounding certain pieces like the attraction of an enigmatic person, an immediate acceptance, a ‘yes’. Others cause hesitation, perhaps because the image is outside the purview, a result of the othering, the transfer from the subject, through the process, to the reception. It enables a distancing moment as viewing involves judgement, referencing attendant criteria embedded in taste and informed perspectives. Then the imagination of the viewer is set in motion by these small personal drawings.

A lot could be said for his works – as many storylines, essays, screenplays and ambitions as are part of each human’s life. The works in this collection may be small in scale, but they are poignant, indicative of a larger committed art practice that touches upon the intellect and sensations in as many ways as there are differences and similarities among people.